A brief history of Crowthorne 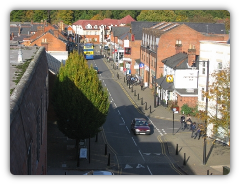 Crowthorne only grew up in the second half of the 19th century when the establishment of Wellington College and Broadmoor Hospital attracted people to the area for work. The name dates back, though, to the 17th century, being a description of a place in the Royal Forest of Windsor at the junction of three walks.

Wellington College was founded in 1859 and was named after the first Duke of Wellington who died in 1852. The Prime Minister of the day (14th Earl of Derby) agreed with Queen Victoria and Prince Albert that a charitable institution should be set up in memory of the famous Duke, in the form of a school to educate the orphans of army officers, with the money to be raised by subscription. The Great Seal was passed in December 1853 and HRH Prince Albert unanimously elected the President of the Governors. The Charter itself did not preclude the possibility of Wellington College becoming co-educational; however, at that time, it was considered that the funds could not finance it and it was not until the 1970s that a limited number of girls were allowed to join the Sixth Form.

The site for the college was chosen mainly because of the cheap price of the land together with the abundance of building materials in the locality. The style of the building is usually referred to as “Nineteenth Century Baroque”.

Queen Victoria laid the foundation stone in 1856 and the first 76 boys arrived on 20th January 1859: 49 were Army orphans paying fees of between £10 and £20 a year; the remaining 27 were sons of serving officers and civilians paying fees of between £70 and £100 a year. A week after the boys arrived, Queen Victoria performed the official opening ceremony. The school retains close relations with the village, with a sports club open to public membership which provides a variety of facilities including a fitness room, indoor and outdoor swimming pools, and a climbing wall. Many courses are available in a variety of sporting activities.

The other major institution in the village is Broadmoor Hospital. It was originally named Broadmoor Criminal Lunatic Asylum, and had been built following the Criminal Lunatics Act of 1860. It is uncertain why Crowthorne was chosen as the site. The first patients to arrive there were 95 women in 1863, with male patients arriving the following year. In 1872 it admitted one of its more famous patients: Dr William Chester Minor, an American surgeon. (For more on Dr Minor see the BBC Legacies site.) The story is told in full in the book “The Surgeon of Crowthorne”.

The mental health act of 1959 (which came into operation in 1960) changed the name to Broadmoor Hospital, making it into a special hospital for psychiatric patients “of dangerous, violent or criminal propensities”, its role being to treat these patients.

The patients include persons sent by the courts either because they are too ill to defend themselves in court or not to be held responsible for their actions. Others are sent there because it is thought that for their own sake and that of others they should be treated in a secure hospital where they are unable to leave the treatment situation. These people need not have broken the law or appeared in court: the decision in their cases is that of the doctors.

In 1952, following the escape of a homicidal patient who killed a little girl in Arborfield, there were calls in the village for some sort of alarm system to give some warning of an escape. As a result of this, a siren was set up including six satellite sirens which sound each Monday morning as a regular test. Should there be an escape, the people in the village suffer from this siren sounding for approximately 20 minutes. The ‘all-clear’ siren also sounds for at least 20 minutes when the patient is recaptured whatever the time of day or night! If there is an escape from Broadmoor, Crowthorne comes to a standstill for the duration because road blocks ring the village and each car is checked for the missing patient.

Crowthorne residents are often asked how they feel about living in close proximity to a lot of “Homicidal Maniacs”; in fact the people of Crowthorne would probably not be aware of the Hospital’s presence if it weren’t for the siren each Monday morning at 10 o’clock. Escapes are very rare and although when there is an escape, there is some tension in the village, the village hardly notices Broadmoor Hospital.

In the last 50 years, the village has grown enormously as a result of its proximity to London and Heathrow Airport: many new housing estates have been built and Crowthorne has become a desirable place to live. It has its own station, dating back to 1860, built as a result of pressure from the Governors of Wellington College on the Directors of the Railway (plus £500 paid by Wellington towards the cost). It was originally named “Wellington College for Crowthorne”, and so it remained until 17th June 1928, when it was renamed “Crowthorne Station”. The old name board remained until World War II, though, when it was taken down to prevent invading parachutists knowing where they were.

The building of the Transport and Road Research Laboratory to the North of the village attracted a great many more people to settle in Crowthorne. The lab. itself dates from 1930 but the Crowthorne site was officially opened in 1967. At this time, the work was almost exclusively confined to road engineering in the fields of soil mechanics, and bituminous and concrete technology. After World War II, the activities of the Lab. were extended to road traffic and safety. Latterly, its role has been defined as the provision of technical and scientific advice and information to help in formulating, developing and implementing government policies relating to roads and transport, including their interaction with urban and regional planning.

The churches in Crowthorne are very active, and work closely together on a variety of projects (St John the Baptist church is pictured). The main event during the year of an ecumenical nature is when churches in Crowthorne get together in each others houses for the Lent Study Groups. Every other year, there is an ecumenical musical production which all are welcome to get involved in. In 1977, to celebrate the Queen’s Silver Jubilee, a carnival was organised. It proved so successful that it was decided to make it a regular event – every other year. Each year, there is a theme and floats are entered by many organisations who come together to produce a procession and a day that is enjoyed by all.

As in many towns and villages in the UK, there are Brownie packs, Cub Packs, Scouts and Guides, and many other groups and clubs for children to join. There is also a social club and an active branch of the British Legion together with a residents association. Despite being some considerable distance from the sea, there is also an active branch of the Royal National Lifeboat Institution.